After I posted my last letter to you, it occurred to me that I ended it rather abruptly. Even the placing of the post went a bit squewiffey, which I attributed to Mercury traveling retrograde rather than the letter itself objecting to not having a tail. I was absorbed in the question about my choice of telling you a tale from my childhood. I rarely, if ever, indulge in sharing my memories. Something, however, was important about my telling you that. Meanwhile, others were flooding my mind as well. For some reason, my unconscious was prodding me along that path. What was so necessary about these memories?

I think by Wednesday (I post Monday morning) I realized I was focused on my childhood environment because it provided me strength; nourished a positive forward-looking perspective that helped me survive the ordeals that lay ahead when my family and I emigrated to the States.

But why these memories now? Memories never arise unbidden. I had called them forth unknowingly. Consciously, I am concerned about the turbulent times in which we live. I am looking for a way to address these concerns. There are tried and true ways to approach uncharted waters. What are they? My thoughts are Eurocentric yet such a focus is not usual for me, even though I indeed hail from England with Irish parentage.  Something seems to have worked in my early upbringing that has helped me live (mostly) with honor. I love to work and learn. I am (mostly) a good friend. What is it that niggles at the edges of my consciousness?

And so, one thought led to another and more childhood images rose. I realized they were memory snapshots of events that I had taken from my earliest years when I recognized I lived in a world that was larger than my inner world and it was populated with alien-feeling bits I wanted to comprehend.

Thus, making a fateful decision to turn my mind into a camera, I began my personal journey through the world. I became a voyager.

I was three years old when my brother was born. My father had begun living with us, newly released from duty with the Royal Air Force. One morning I walked down to the end of the garden to the swing. I felt sad. I had never felt, as far as I knew, the feeling before. I sat on the swing, kicking the dust where my constant dragging feet had worn a patch in the grass.  I was busy feeling a world inside my body that colored my mood. I had no name for what was occurring. Hmmmm. I wanted to know what had happened that caused me to feel sad. Ah. There was the name. I was reaching for the concept of sad. I could not tell quite what it was. It wisped in and out.

I noticed my father pushing the white lace bedroom curtain aside, looking out at me. The window was tall and framed his height. He had a look of concern on his face but he left me alone. I felt bad he was worried and the sadness slipped away.

It was then I decided to take a picture of that moment. There was an inside moment and an outside moment. From now on, I thought, I will take snapshots with my mind, of things I do not understand. I’ll store the pictures away and when I am older I will take them out [of my memory album] (I did not know enough to call it that), look at them and understand what had happened.

Thus, I sat holding the tiller of my small boat, no one else. I needed to steer as deftly as I could. Each choice would, and continues to be, a humbling reflection of my intelligence and willingness do the right thing by all, including myself.

In this meandering way, I found the true reason for my writing letters to you. I am an old lady now– not in spirit but in years. I love this life with all the harshness we impose on it and ourselves. It is a jolly interesting experience. It runs like an epic movie that never gets stale. And that’s just the plot line. This life has a depth and breadth, like a wondrous iceberg, all blueish translucency floating majestic. Only the top ten percent is visible above the water line. Below– the remaining ninety percent lies out of our sight. If interested in discovering the phenomenal beauty of this alien thing, we must dive down to the hidden reaches of its world and behold the awesomeness of its totality.

Do not mistake the appearance of this world to be the thing itself. There is the remaining ninety percent that lies beyond our usual senses. Diving into the paradoxical wonder of our experience with this life, its song and scream, this is what my letters to you are really about.

Let us dive into the waters of the unconscious and see the sights together. There are two ways to do this. Let us figure out how and why each aspect of life necessarily attracts its own opposite to form the totality of itself and in its seeming unlikely bond continues the creation of life. Also, let us look at how our thinking is shaped, flavored, and fragranced by our environment and by our beliefs. Most of the experiences that mold our thinking may be quite good. But when thinking goes wrong …

As I proceed, bear with me as I wander around topics. I am letting my unconscious guide me. As you know, the unconscious refuses to take a linear path. It circles by picking a thing up, looking at it and putting it down to return later and peruse it in detail. The unconscious has its own highly organized protocol that is to be trusted.

Now I see why I pulled on the Druidic Bard and the Terrorist, Beauty and Evil, as complementary opponents.  I was on my way to seeing the pattern of my undertaking. The essence of each character needs the other to complete the full experience of Itself. Each aspect questions, experiments with the same idea but has taken opposite paths: one to create, the other to destroy. Each seeks to open what is unresolved, see what cannot yet be seen.

One sings out the paradox. The other screams. Such is the stuff each person is made of.

I will keep pulling out snapshots from my memory album to illustrate ideas that I trust will resonate with yours. And, of course, I’ll keep telling stories that have survived the test of time because they speak a universal truth. And merit revisiting.

Thank you for your reading and emailing comments. Your questions and comments help me focus on what matters to you. Your suggestions are always considered. 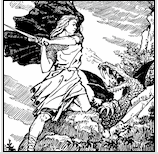 The Story of Siegfried by James Baldwin

Please go to the recording of The Death of Balder: Adventure 13

All of us are poets – the Saxon in the chilly north and the Greek in the Southern sunny lands. The sun refined people’s thoughts while the frost made the Northerners rugged, energetic, and uncouth. However, each saw a system of regularity as if controlled by some law or a superior being. Stars and the changes of seasons et cetera were aloof and mysterious. Their stories did not tend to explain but gave expression to their imaginings.

Hades stole Persephone (summer) from her mother Demeter (the Earth). In sorrow, the Earth clothed herself in mourning (no leaves on trees, flowers, birds). In a few months, she would return and all would bloom. Odin (All-Father) became angry with Brunhilde (the maid of spring) and wounded her with the thorn of sleep. She and all else were wrapped with sleep in her castle until Siegfried (sunbeam) awakened her with a kiss. Loki (heat) betrayed Balder (sunlight) and induced blind Hoder (winter months) to slay him. Hela (death) permitted Balder to revisit Earth from time to time. (The Northern reaches of the hemisphere spends 6 months in darkness).   –summarized from W Wagner, Asgaard of the Gods