On this snowy evening, I would like to share some notes on the libido. I do not have time to weave theses notes into a tidy essay. However, I think they compel just as they stand. First, let us review the through-line of my previous letters so you can see why the content of this one connects to the others.

On November 9, I suggested the West was cycling through a spiritual upheaval that occurs every thousand years or so. This doctrine is called millenarianism.  On some level we sense it since a generation of young people are called millennials.

Historically, a turn in the century turns up stress because we perceive we are venturing into the unknown. As one thousand-year cycle ends and the next one starts, stress peaks.  The past and the future collide. Our second millennium (per the Gregorian Calendar) coincides with vicious outbreaks in many countries, including our own, where some of us have elected a tacky tyrant. Others work to restore the wounded and reset our course before it’s too late. I introduced stories of the Trickster to illustrate how Trump-era upheaval can unexpectedly offer a lens for observing our dilemmas.

On November 14, I continued the theme of viewing social and personal upheaval with conscious objectivity. We can inquire into the meaning of global change: How does it affect relationships with our world neighbors? How do we conduct trade, cross borders, conduct principled business, access affordable education, invent responsible technology, and deal with health care, environmental health, economic health, climate change, and war if necessary. To proceed sensibly we first need to know how our psychology. How is the human mind nourished and healthfully strengthened, and how does it get infected?

This is not rocket science. Our ancient ancestors probably knew the fix by the time they dropped out of the trees. The point is, we are on the edge of vast change in all these domains, and there are 7.4 billion souls eking out a life on this planet. Yet 87.5% of the world’s ten-year-old girls are denied education, health care, and safety.  We cannot be irresponsible about our mental hygiene. A greedy agenda, cavalier attitude, or willful ignorance makes life unsustainable.

Self-knowledge is realizing the mind is fallible and the heart is not always valiant. Self-knowledge is necessary to survive. Divest yourself of false wrappings. Become better aware of your unique psychological sphere.  The tales at the end of this letter are about Anansi the Spider. It’s an African tale wherein God sees his false wrapping and King Janaka must face his as well.

On November 21, I talked about the essence of evil and its counterpart, beauty; the instincts to destroy and create. To manage the highly charged relationship between the two urges, we must learn to enter the unconscious with respect and harness energies in discord. Require balance between them, otherwise we blindly follow the desire to dominate and control, either by devouring or by oblivious play. The tale about the Shiva and Parvati represents a coming into balance of opposing yet complementary forces.

On November 28, over the Thanksgiving weekend, I took a breather and related the story of two wise men who went on a ramble. The Rabbi thought Elijah responded nonsensically to hosts who provided bed and board but Elijah reminded him that Life had a hand in the game and directed the play for reasons of its own. His lesson is to trust the arc of Life. In the meantime, my friends, observe people and events in Life with conscious objectivity.  As my old philosophy teacher used to say: Everything is just right!

On December 5, I lifted the curtain on one of our cReative asyLum discussions and shared a transcript about ego inflation, touching evil, our shadow side and its home in the unconscious, ethical action, accessing and processing self-knowledge, the value of myth in this process, how libido is involved and what artists do to nourish others’ souls; build the architecture of culture which accommodates the collective essence of souls.  We ended our discussion realizing that libido yielded the fruit of creativity. To harvest those fruits we need to freely journey through its domain and back to consciousness. The vehicle that brings insight back to consciousness is: Image, Symbol, Myth.

Today, on December 11, I share notes on the libido with you. Libido is a deep layer of the unconscious that is usually out of reach for the ordinary person unless one is inquiring, relentlessly curious. What is it? What is its origin? How does it work? Why is it necessary?  These are first notes. Just a taste, if you will. We will go deeper next time. We are theoretically adventuring into the mysteries of deep mind. (For the real personal adventure, go into therapy). I want to show you its marvels, both wondrous and ominous. I want you to look at the world that you inhabit, observe the comings and goings of people and events with conscious objectivity. If I show you the rules by which the mind functions then maybe, hopefully, in time, you will be able to decode the cipher of human behavior. You may be able to connect the dots between action and consequence, even predict outcomes because you will have the multi-dimensional mind game down. As artists, you may become inspired to build new myths, soul food for a culture, safe accommodations for the essence of the personal/collective soul.

Simply put, libido is psychic energy that lies deep in the unconscious, its contents are not perceptible to consciousness.

Instinct wars with instinct. We rage against ourselves, suffer from ourselves, from the spirit of the age, from an objective, impersonal cause that rises from our own personal collective and archetypal unconscious which we have in common with all people.

The libido sinks into its own depths, lingers in the depths of its own memories, (ancient, collective, archetypal) in the source of its origins, the paradisiac state of its own infancy from which we are driven by the law of time. (Sweet feelings of home and childhood; Debussy–The Sunken Cathedral.)

Connecting with the libido is union with oneself. Locate raw images within oneself, break open.

Nietzsche broke open with Zarathustra, Jung broke open with The Red Book, St John with End of Days. Aztecs broke through with crucifixions, as did the oldest of Sufis who punished their flesh to reach God, Inanna’s descent to the underworld where she died and rose- as did the Christ, the sacrifice of Odin, St Sabastian.  All are images or symbols, humans involved in ritual  who projected the psychology of the time either by personal event or through the creation of  artists’ imaginations.

Libido is the creative power. It brings forth the useful and the harmful, the good and the bad. It is Life-Force.

It can only be released into consciousness by fantasy images.

It is desire (not necessarily sexual).

It is unchecked by any authority, moral or otherwise.  Images, symbols fly from the libido to consciousness in 1/20 of a second.

It is appetite in its natural state – hunger, thirst, sleep, sex, emotion.

It is autonomous– “…it knows where it ought to go for the overall health of the psyche.”

Where there is lack of libido there is depression. It has backed up in order to stir unconscious contents – to confront conscious attitudes.

The energy left over from this activity cannot be transferred to a consciously chosen activity (object). It is fastidious in its direction and will move only when the right direction for health is chosen.

The task in psychotherapy is to discover the natural direction of a person’s libido energy.

Think of nesting dolls– only infinite in number (remember “infinite” is not a number).

Contents constellate increasingly introverted, regressed to latency, and beyond primordial.

Archetypes are enriched with individual memories

Archetype is always a primordial image representing the need of a given moment. It is numinous (hyper-real) because it is imbued with the energy from the libido.

Archetype attracts to itself the contents in consciousness that will render it perceptible, therefore capable of conscious realization. Thus, illumination/revelation.

To repeat the experience, ritual is developed to compel the unconscious to regress. Ritual can occur as magical ceremonies, sacrifices (Aztec crucifixions), invocations, prayers et cetera.

Entering union with oneself, entering the maternal womb of the mind stirs fear of incest thus, repulsion. These undifferentiated unconscious fears are the cause of backlashes against women. Women are unconsciously perceived to be potential annihilators. This view of women is the complimentary opposite to their being the fertile source of Life. Thus, Dualism.

Therefore, we have resistance to enter the libido imagined to be a furnace or retort where we [ego] fear “burning up”.

However, if we resist observing our conscious thoughts and feelings objectively, resist locating images that symbolize influences that shape and pattern our thinking, we will harm ourselves. Hence, voters believe the strongmen.

There is a saying: If thought can go wrong, it will.

The ouroborus  is a symbol of individuation; breaking the wall between conscious mind and the unconscious to discover the truth of ourselves.  This is the purpose of psychotherapy. 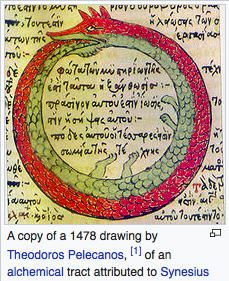 Individuation happens when one becomes wholly oneself; there are no psychological dependencies on one’s parents or children, others, the state, religion, or God. No begging bowl

One does not conform but stands independently, thoughtfully, considerately, in respectful relationship to all things.

To break open resistance means facing the fear of psychologically “burning up” in the realization of the consequences of one’s distorted thoughts; not to overcome distortions but to become familiar with them to develop a healthy working relationship with oneself.

Libido sinks to the navel where it first entered the body. In Indian philosophy, the belly below the navel is the true psychic center, the site where dream originates.

Under stress, the psyche flows back to this space. Libido can get stuck, psychic energy does not flow freely. Then one becomes nothing, moribund, seriously ill.

But journey into the libido (the underworld) can be a plunge into the fountain of youth – libido awakens.

Symbolic Story from the Visnu Purana

Visnu is a symbol; he sustains all Life. It is in his dream that we all exist.

Brahma is wisdom. He sees all. He meditated the Vedas (books of psychogical/spiritual relationship between humankind and God). His meditation brought the books into being.

The myth shows how libido can steal into the psyche, the unconscious. 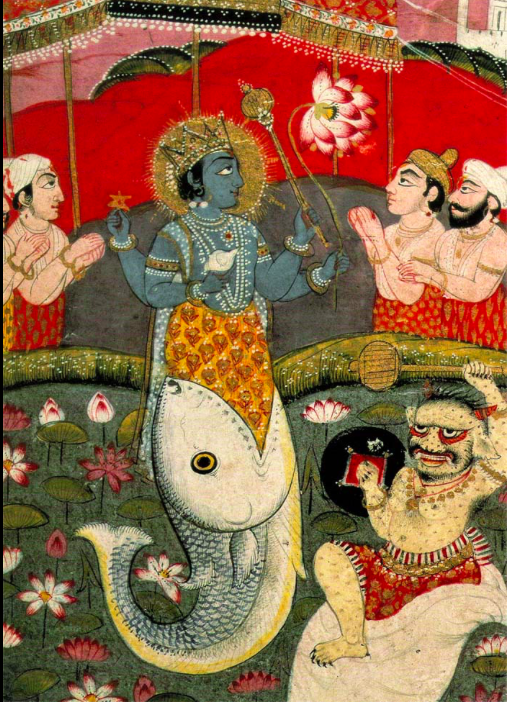 Through introversion and regression the sleeping contents constellate. These contents are archetypes, primordial images fat with personal memories. Introverted libido is imperceptible to conscious mind. Imagine, for example, that a crystalline structure of thought is saturated in a solution and its structure can be seen. The constellated archetype eg mother, father, wise old man/woman, and child in all their various incarnations of good and evil in the forms of parents, gods and goddesses, tricksters, benevolent helpers, healers, demons, et cetera are dyed and each archetype presents itself (you can only manage one archetype at a time) according to  the need of the moment.

Myth: The hero, Theseus is stuck in the earth. Hercules comes to free him. (Theme of individuation)

The aging king is reborn through woman.

NEXT TIME: Libido and the Artist.